New Orders at Chinese Yards Continue to Shrink over January-April

New shipbuilding orders at China’s shipyards over the first four months have continued to shrink on the back of reduced orders by shipowners, according to the latest figures released by China Association of the National Shipbuilding Industry (Cansi). 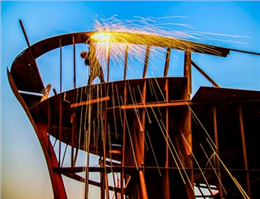 From January to April this year, Chinese shipyards sealed 6.65m dwt in tonnage terms for newbuildings, representing a marked 51.8% year-on-year drop, Cansi figures showed, reported by MANA Correspondent.
The latest decline extended from the first quarter figures where newbuilding orders dipped by 25.4% year-on-year to 5.54m dwt.
The Chinese shipbuilders’ order backlog up until 31 March 2017 was registered at 86.62m dwt, a decrease of 30.3% year-on-year and down 13% compared to end-2016.
In completed newbuild tonnage, the Chinese yards built a total of 18.56m dwt in vessel capacity over the first four months, a hike of 71.9% compared to the same period of 2016.
Cansi statistics also showed that over the four-month period the country’s 53 leading shipbuildings received newbuilding orders of 5.53m dwt in capacity terms, a decrease of 58.4% compared to the previous corresponding period.
The 53 leading yards completed vessel tonnage of 15.84m dwt, up 57.1%, and sat on an order backlog of 81m dwt, down 32%.
The association further monitors 80 main shipyards showing that their combined completed vessel value to be at RMB115bn ($16.7bn), a fall of 8.9% year-on-year.
The 80 main shipbuilders generated a total revenue of RMB83.2bn in the first four months, a slip of 10% year-on-year while total profit plunged 45% to RMB600m.
0
Tags: Shipbuilding china newbuilding 2017
Visit Home
Send to friends
Print
Newsletter
Share this news