The director of Islamic republic of Iran Shipping line (IRISL) stated: national fleet is receiving effective and constructive support from the administration and this trend will be continued. 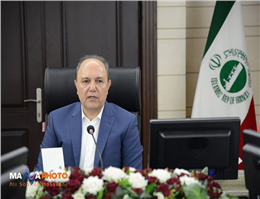 Stating that IRISL was going through a very hard time at the sanctions era, Dr. Mohammad Saeedi, the director and head of the board at IRISL remarked that the sanction-imposing countries had targeted the main axis of the country’s exports and imports, MANA correspondent reported.
Saeedi continued: sanction-enforcing countries believed that if they could paralyze IRISL as a national fleet, exports and imports routes would be disrupted, which lead to economic failure, creating sense of dissatisfaction among people and preventing Iran from accessing to financial resources.
At the sanctions era, IRISL stood up resiliently and made endless attempts to neutralize sanction-imposing countries’ measures, despite this company and its subsidiaries had been suffering from the dense shadow of different sanctions, particularly in the field of receiving insurance services, Saeedi added.
He also added: all along the sanctions era, international insurance corporations broke off their relationships with IRISL, which caused the major limitations for traveling to key and important international ports.
Saeedi continued: the second challenge was the break-off of the ties between international classification societies and Iran, indeed, Iranian ships could not commute to international ports without achieving authentic certificates from the classification societies, on the other hand, With regards to the renewal process of fleet, we were also faced with serious challenge and IRISL was able to being active in just East Asia, Persian gulf and Africa with many restrictions.
Increasing Insurance Coverage
IRISL director reminded: we have settled down all our insurance issues successfully, which could be regarded another benefit of lifting the sanctions and the execution of JCPOA.
At the first step, we received a 75-million dollar insurance coverage from prominent world insurance companies and then this figure rose to 450 million dollar, in addition, we could managed to achieve one-billion dollar reinsurance coverage as well, according to Saeedi.
In this line and after 10 year, Saeedi added, IRISL was admitted as a board member in London P&I Club, which could be regarded as another honor of in the post-JCPOA era.
He proposed: we have also signed contracts and agreements with the most prominent world classification societies and our ships have received valid and authentic certificates, hence, we do not face any restrictions in this regard.
IRISL Fleet Renewal
Later in this press conference, Dr. Mohammad Saeedi stated: retrieving the contracts which were suspended at the sanctions era was yet another achievements of execution of JCPOA, among these contracts, the construction contract for 17 vessels in the South Korean HIUNDAI Corporation which was signed in 2008, was the most important one.
He added: we settled on an agreement with Hyundai, which led them to accept our previous payment as the deposit and enabled us to obtain the remaining 80% as finances from Korean banks, he further continued, it has also been the first international finance in the course of 10 years ago.
The advantages of this contract worth of 670 million euro is that, Saeedi asserted, for the first time, new generation cutting-edge containerships with the capacity of 14500 TEU will be joined and renowned Iran national fleet.
Raising Iran’s flag in International Waters
Announcing that IRISL fleet possesses 152 vessels, Saeedi stated: current container carrying capacity is 120.000 TEU and bulk fleet capacity reaches 5 million DWT .
At the sanctions era, our ships were not able to dock at international ports and foreign were refused to travel in Iranian ports.
Referring to the honor of maritime venture under Iranian flag, IRISL director proposed: due to extensive restrictions at the sanctions era, Iranian ships had to travel with other countries’ flag in in the international waters, but thanks to the sanctions removal, Iranian ships could travel to every corner of the world while carrying Iran ’s holy flag.
Expansion of Representatives’ Activities
In another part of his speech, Dr. Saeedi stressed that IRISL was the first company that benefit from the execution of JCPOA.
Immediately after the execution of JCPOA, we established joint venture companies with Italy and German, owing to that these two regions are hub in the Europe and cover the North and South of Europe.
Emphasizing on the revival of IRISL brand as one of the main priorities, the director and head of the board at IRISL expressed that in one and half years ago, we could make noticeable achievements and currently, our international ranking has promoted as much as four steps and we have leapt forward from our 23rd rank last year to our current 19th rank in the classification of best shipping lines worldwide.
0
Tags: Post-JCPOA Era turning point fleet international activity
Visit Home
Send to friends
Print
Newsletter
Share this news