Freight forwarding sources in Asia told Lloyd’s List that some smaller forwarders, in particular, whose businesses could potentially be threatened in the event that containers are caught up in any possible future bankruptcy event, were preferring to use other carriers where possible since Yang Ming raised concerns last month by suspending trading in its shares for two weeks. 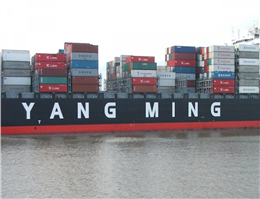 According to MANA, Shares in Yang Ming resumed trading on May 4 on the Taiwan Stock Exchange at more than twice their value before their suspension on April 20, thanks to progress in its financial restructuring.
Yang Ming said then it expected to complete the second stage of its recapitalisation by June 2017, when it would be “announcing the identities of the investors who participated in this round of issuance, as well as the details of this offering”.
Analysts maintain there is little or no chance that Yang Ming will go the same way as Hanjin, chiefly because they expect that the Taiwanese government would intervene and bail out the line if necessary.
The Alliance partners Hapag-Lloyd, K Line, MOL, NYK and Yang Ming have created an independent trust fund to safeguard cargo in the event of any member lines going under.
But Patrik Berglund, chief executive of the rates benchmarking platform Xeneta, questioned whether the Taiwanese container line was financially stable yet – and how easily consortium members of The Alliance would cope with any future bankruptcy among one of its members.
He noted that the Taiwanese government had talked of investing $1.9bn in Taiwan’s container shipping sector, and that Yang Ming had highlighted an additional $54m from six private investors. But he questioned Yang Ming’s assurances that the line would be returning to profitability in 2017.
"Yet they refused to release the identities of the six private investors, and the shipping world correctly noted that six $9m investments were hardly going to keep Yang Ming afloat.
"Financial analysts think at least $300m will be needed in 2017 to keep them from running out of cash.”
0
Visit Home
Send to friends
Print
Newsletter
Share this news