The Baltic Supramax Index slid throughout the week, settling at 799 points on Monday, compared with 849 a week ago. 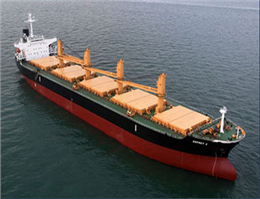 According to MANA, The weighted time charter average was assessed at a two-month low of $8,993 per day versus $9,544 on May 2, a decline of 5.9%.
Freight rates on all the benchmark routes dropped on the lack of cargo movement and a build-up of tonnage.
Meanwhile, “owners are asking for high rates”, said a Shanghai-based broker, “but charterers are stepping away from the market to put downwards pressure on prices”.
One Singapore-based broker voiced confidence that supramax spot earnings would bounce back after the recent lull as there were expectations that grain cargoes would lend further support to the market.
According to Public Ledger — Informa’s online publication on agriculture markets and trade — Chinese soyabean imports are expected to rise further in the coming months, to more than 8m tonnes a month.
In the Atlantic, a 2003-built, 50,000 dwt ship was fixed at $13,000 per day from east coast South America for a trip to east coast India.
China imported 27.5m tonnes of soyabeans during the first four months of 2017, up 18% from the same period last year, Chinese customs data shows.
Asset prices, on the other hand, have been on the rise, with the latest secondhand deal said to have been agreed at $11.95m for an 11-year-old, 56,000 dwt bulker, according to VesselsValue data.
In the demolition market, two supramax vessels were sold for recycling to Chinese yards at undisclosed prices.
0
Tags: Supramax rates two-month low ebb
Visit Home
Send to friends
Print
Newsletter
Share this news