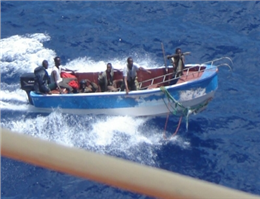 According to MANA, political instability and harsh living conditions in Somalia and Yemen have contributed to a return of maritime attacks in that part of the world, with 22 incidents reported in Q1.
This despite the “substantial suppression’ of piracy by the international community that took place since the problem was at its peak there in 2012.
The latest rise in the number of attacks means that the Indian Ocean area has become “a potentially dangerous route for commercial vessels and trade into Europe again,” according to MAST coo Gerry Northwood, former Royal Navy counter-piracy commander.
But the problem is not geographically confined since Southeast Asia has also seen a rise in attacks with 17 maritime crime incidents recorded across Indonesia, the Philippines and Malaysia in Q1, while other criminal activity occurred in South Asia (4) and South America (5).
Of the 48 incidents in the first three months of this year, 36 involved a ship being boarded by unknown assailants resulting in a robbery, with some cases leading to the ship being hijacked.
0
Tags: india Yemen somali Somali Pirates 2017 Asia
Visit Home
Send to friends
Print
Newsletter
Share this news