Giant Containerships to Access NYNJ Terminals as of June

In less than two months, ships of up to 18,000 TEUs will be able to pass below the Bayonne Bridge, connecting New Jersey to New York, and access terminals located in New Jersey and Staten Island. 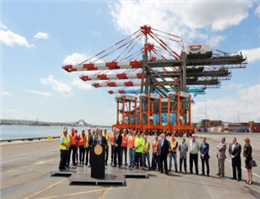 Namely, the USD 1.6 billion raising of the Bayonne Bridge roadway project is ahead of schedule and will allow the world’s ultra-large, environmentally friendly container vessels to pass beneath the span as of June 30, New Jersey Governor Chris Christie announced on Tuesday, MANA correspondent reported.
This would mean that the project would be finished six months ahead of scheduled completion date.
Recently U.S. Coast Guard Sector New York and pilot organizations lifted air draft restrictions enabling vessels carrying up to 9,800 TEUs to call terminals west of the Bayonne Bridge without worrying about tidal conditions. Soon, the newly raised roadway will provide a clearance of 215 feet – the same as the Verrazano-Narrows Bridge, the announcement from the Port Authority of New York and New Jersey reads.
“‘Raise the Roadway’ is a visionary project, accomplishing what once seemed impossible for the long-term benefit of our regional economy,” Port Authority Chairman John Degnan said.
“It began with the unprecedented accomplishment of building a new roadway through an existing bridge structure, with traffic continuing to flow on a lower roadway. Removal of the lower roadway will make it one of the most important American infrastructure projects in history to facilitate global trade.”
The project was launched in 2013 so as to enable the ever bigger boxships to travel under it, boosting the port’s competitiveness. The bridge currently has a navigational clearance of 151 feet, which means that only ships ranging between 8,000 to 9,000 TEUs can pass under it.
In February, a new elevated roadway through the existing arch bridge and over the original roadway was opened, while maintaining traffic flow on the lower span. The bridge is scheduled to be built to its full width by 2019.
The announcement comes on the back of the completion of the 50-foot Harbor Deepening Project.
The US East Coast ports, mainly New York and Norfolk are expected to reap the most fruit from the cargo influx from the expanded Panama Canal.
0
Tags: container ship New York New Jersey terminal operator
Visit Home
Send to friends
Print
Newsletter
Share this news