Nearly 2,000 Seafarers Affected by Piracy in West Africa in 2016

There was a 57 percent rise in the number of seafarers affected by piracy in West Africa in 2016, a report on the state of maritime piracy released by the Oceans Beyond Piracy (OBP) program shows. 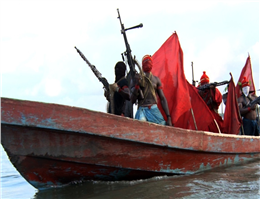 Last year’s rise in piracy and armed robbery at sea in West Africa saw a recorded 95 incidents overall, compared with 54 in 2015, MANA correspondent reported.
That also led to a significant increase in the human cost, according to OBP, with 1,921 seafarers being affected compared with 1,225 in 2015.
What is more, there has been an increase in kidnap for ransom attacks, with 18 incidents recorded during which seafarers were kidnapped from merchant vessels. Several failed attacks were likely attempts to kidnap seafarers as well. All of these attacks could be traced back to groups operating from Nigeria, the report shows.
Namely, 96 seafarers were taken hostage, more than double when compared to 2015 when 44 seafarers were kidnapped for ransom.
“Almost two-thirds of all incidents recorded in 2016 were reported off Nigeria in the exclusive economic zone (EEZ) and territorial waters, and violent attacks in particular were concentrated almost exclusively in that area,” OBP said.
Even though security agencies in the region, particularly in Nigeria, continued to improve their capacities throughout 2016, limited maritime capacities remain a challenge for law enforcement agencies.
“The absence of robust legal frameworks, the insufficient effectiveness of domestic justice systems, and other factors inhibit the legal finish of prosecutions related to criminal activities at sea. This is emphasized by the fact that to date, there have been no successful prosecutions for maritime piracy in West Africa,” OBP said.
The program estimates that the economic cost of the piracy in the region for 2016 was USD 793.7 million, up from USD 719.6 million reported for 2015.

With regard to Asia, OBP calculated that 2,283 seafarers were affected by piracy and armed robbery in 2016, down from 3,674 in 2015.
Kidnap for ransom represented the most violent model in 2016, with 67 seafarers taken hostage in the Sulu and Celebes Seas, of which two were killed while in captivity.
2016 saw an increase in seafarer deaths as 6 seafarers were killed during or as a result of incidents.
In East Africa, the total cost of counter-piracy operations in the Western Indian Ocean has steadied out at around USD 1.5 billion.
As informed, now that coalition forces have ended or decreased their commitments, independent deployments from various countries such as China, India and Japan account for the majority of days on station with relation to naval counter-piracy operations.
In an attempt to lower costs, ship operators are increasingly shifting towards privately contracted armed security teams comprising three rather than four members (almost 70% in Q4 2016).
Piracy and armed robbery in the Western Indian Ocean region affected a total of 545 seafarers in 2016, based on the report’s figures.
However, the Naham 3 crewmembers, who were held for over 4 ½ years were released on 22 October 2016. Eight crewmembers taken from the Iranian dhow Siraj in 2015 have yet to be released.
0
Tags: piracy Africa 2016 kidnapping
Visit Home
Send to friends
Print
Newsletter
Share this news