A regular shipping line was launched between the Indian Port of Kandla and the Iranian Port of Bandar Abbas. 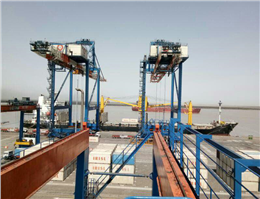 MANA correspondent reported that by the docking of the Arezoo Ship as the first vessel to go through the Kandla-Bandar Abba-Umm Qasr, this container shipping line was officially inaugurated by IRISL container company (Hafez Darya-Arya). In its first venture, this vessel loaded 607 containers and disembarked 998.
Based on MANA report, Kandla Port enjoys a competitive privilege since it is connected to India’s national railway network and it has short distance from other Indian ports. Plus this, the operational costs for goods owners on this port is far less compared to other ports.
Through signing the contract for the establishment of this line, IRISL founded an exclusive to the Indian Kandla Port, and hence, goods owners now have a third option added to the earlier options of Nhava Sheva and Mundra that IRISL already covered. It should be added that, compared to the other two ports, Kandla Port has shorter distance to production and consumption services of India, and it is predicted that 4 Iranian ships dock at this port on a monthly basis.
IRISL Container Company intends to retrieve the Iran-India-Europe lines once more, and its plans to make direct connections from India to Europe will be operational soon.
0
Tags: Direct Shipping Line iran india
Visit Home
Send to friends
Print
Newsletter
Share this news