Port of Rotterdam Off to a Good Start

Dutch Port of Rotterdam has seen a 8.8 percent increase by volume to 3.3 million TEU in its container sector during the first quarter of 2017, the port figures show. 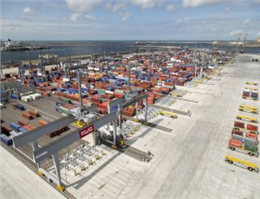 According to MANA, For containers, this was the best quarter ever, and March was a record month. The Rotterdam container companies have performed strongly in a market experiencing only limited growth,”said Allard Castelein, CEO of the Port of Rotterdam Authority.
Container throughput increased 10.8% by weight to 34.3 million tonnes, which the port believes is significantly more than the market average.
According to the port authority, activity at the new terminals on Maasvlakte 2 is improving all the time, and shipping companies have brought back to Rotterdam substantial quantities of transshipment cargo that had been moved elsewhere in late 2015 and early 2016.
Overall, in the first quarter of 2017, 2 % more goods passed through the Port of Rotterdam than in the same period last year.The total throughput volume increased to 119.3 million tonnes.
The total throughput of the breakbulk segment-RoRo and other cargo- increased by 14.5% to 7.6 million tonnes.
0
Tags: Port of Rotterdam a Good Start
Visit Home
Send to friends
Print
Newsletter
Share this news