Caspian Port Complex officially commenced its operation by the docking of a Khazar Sea Shipping Line (KSSL) ship, at the presence of President Rouhani. 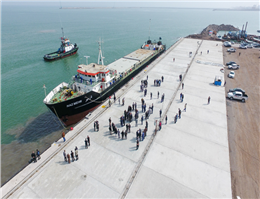 MANA correspondent reported that Iranian President, Dr. Hassan Rouhani, witnessed the docking of a KSSL ship at Caspian Port Complex, which officially inaugurated this port.
As part of President Rouhan’s itinerary in his visit to Iranian province of Guilan, two posts of Caspian Port Complex’s wharfs located in Anzali Free Zone were inaugurated as the president watched a KSSL ship dock. The ship, called “Vista” is the property of Khazar Sea Shipping Lines, and it is capable of carrying 3600 tons of general dry cargo as well as 116 20-square-foot containers. Moreover, other KSSL ships – Nargoun, Nargol, and Nardis – have also docked at the basin of this harbor.
It should be asserted that each of the two inaugurated wharfs are 175 meters long. One of the wharfs is a commercial one, and has been constructed by the direct investment of Anzali Free Zone Organization; whereas the other one, the Dolphin Oil Wharf, has been constructed via the investment of the private sector. The net investment of the former has been speculated around 7000 billion Rials, and for the latter, the figure has been worked out to be approximately 3000 billion Rials.
MANA reported added that Caspian Port Complex, located in Anzali Free Zone, is still under construction, and upon its completion, it is mean to encompass 22 wharf posts and two 5100-meter waver breakers. The completion and operation of Caspian Port wharfs could make valuable contributions to the commuting of the ships, cargo transportation, expansion of trade and hence a boost in the zone’s economy.
0
Visit Home
Send to friends
Print
Newsletter
Share this news