The Shipping Corporation of India (SCI) has rejuvenated its outdated fleet slashing its age by almost a half. 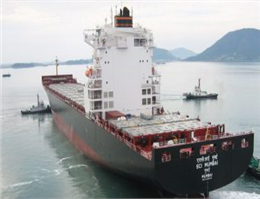 “Shipping Corporation of India (SCI) has replaced most of its aged fleet and it has a modern and fuel efficient fleet with an average age of 9.5 years as on March 2017 compared to average Indian fleet age of 18.4 years,” Shipping Minister Mansukh Lal Mandavya is quoted as saying by the Press Trust of India, reported by MANA.
As a result, SCI’s fleet meets the latest regulations of IMO and its ships are equipped with modern facilities, the minister added.
The company was asked to modernize its fleet in May last year by India’s standing parliamentary committee on transport.
As SCI was posting losses since 2011, it abstained from ordering new tonnage and vessel acquisitions. However, the company bounced back to a net profit of Rs.384.41 crore during 2015-16.
According to SCI’s data, six ships were disposed off during the current financial year, those being three tankers aged between 1992-1994, a bulk carrier built in 1998 and two offshore vessels built in 1984. In addition, one VLCC was added to the fleet-Desh Vibhor, built by China-based Jiangsu Rongsheng Heavy Industries.
Based on the company’s website info last updated in March, 2017, SCI owns a fleet of 69 ships equaling in 3.26 million GT and 5.85 million DWT. SCI’s owned fleet includes bulk carriers, crude oil tankers, product tankers, container vessels, RORO vessels, LPG/ammonia carriers and offshore supply vessels.
0
Tags: india shipping fleet boxship bulk carrier Ro-Ro Ship
Visit Home
Send to friends
Print
Newsletter
Share this news