The pirates have released the ocean going dhow that was hijacked on March 23rd in the vicinity of Eyl, Somalia, the IMB piracy reporting centre confirmed. 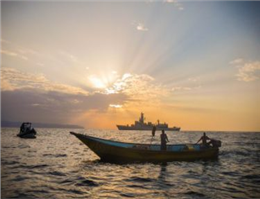 The dhow, which was feared it would be used as a mothership for further attacks on ships further offshore in the Somali waters, was released on Sunday, March 26th after the pirates stole one skiff along with food and diesel, MANA correspondent reported.
United Kingdom Maritime Trade Operation (UKMTO) reported that the dhow was sighted some 70nm off Qalansyia, Socotra Island, however, the whereabouts of the pirates are unknown.
As reported earlier, the dhow had three skiffs onboard. Following the attack, the pirates had released 13 crew members in one skiff, while the dhow with the remaining seven crew members and an unknown number of pirates sailed to an unknown location.
There have been no updates on the fate of the remaining crew members.
0
Tags: Somali Pirates dhow
Visit Home
Send to friends
Print
Newsletter
Share this news