Iran is seeking “good and constructive” support from Russia in the Caspian Sea, Mohsen Sheidayee, the commander of an Iranian naval flotilla, told a Russian news outlet Tuesday on the sidelines of a visit in the Russian port city of Makhachkala. The two countries reportedly see the Caspian Sea as the main area of naval cooperation. 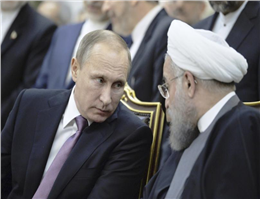 “We are here to strengthen good and constructive interaction with Russia with a focus on safeguarding peace. We are proud that we managed to turn threats into opportunities during the sanctions period,” Sheidayee told Sputnik Persian reported by MANA.
Iranian naval flotilla that included a destroyer and a missile-launching vessel docked at Makhachkala on March 9. This is the third such visit by Iran’s navy to Russia since 2013.
Tehran and Moscow increased their military cooperation in 2015 after Iran reached a deal with six world powers to ease sanctions against the Islamic republic in exchange to cut back on its nuclear research.
Earlier this month, Iran carried out a test of Russian-purchased S-300 anti-aircraft missile system. The system was reviewed through simulated electronic warfare conditions and was reportedly checked for its detection, identification, interception and target-shooting capabilities.
The two countries had agreed upon the S-300 systems’ deal in 2007 but it had to be suspended due to sanctions against Iran in mid-2010. It was only in April 2015 that Tehran and Moscow resumed talks over the S-300.
The latest development related to Iran also comes amid its ongoing tensions with the U.S. Earlier this month, the USNS Invincible spy ship was forced to change its course after Revolutionary Guard’s fast-attack vessels sailed in close proximity to it. Washington denounced the move as “unsafe and unprofessional” and, in return, Iran warned the U.S. of consequences.
In January, Iran tested a ballistic missile test sparking concern. At the time, the U.S. said that it is considering imposing fresh sanctions on Tehran. President Donald Trump also warned the country it had been “put on notice.”
0
Tags: iran Caspian Sea Russia cooperation
Visit Home
Send to friends
Print
Newsletter
Share this news