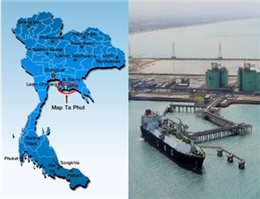 Southeast Asia’s second-largest economy will boost LNG imports by more than 70 percent this year, MANA correspondent reported.
The report said that the country is doing everything it can to facilitate increased LNG imports to replace the declining domestic production. These include expanding the existing terminals.
Producers of the fuel are expected to expand output by about 23 million t this year even as spot prices for LNG in Asia have fallen more than 60% the past three years and demand from traditional buyers in Japan and South Korea stagnates.
Thailand’s PTT, which will boost imports to 5 million t this year from 2.9 million in 2016, is also considering investing in upstream projects as a way to maintain the country’s security of supply.
Thailand currently has a long-term contract with Qatar for supplies of up to 2 million tonnes of LNG per year.
Earlier this year, the CEO of the parent company, Tevin Vongvanich, said that PTT planned to raise LNG imports fourfold as local production of gas declines.
The plans include boosting the production capacity of Thailand’s only LNG terminal in operation from 5 million tons to 11.5 million tons annually, and building a second one with a capacity of 7.5 million tons. By 2030 both should be running at full capacity.
0
Tags: terminal operator Asia investment imports thailand
Visit Home
Send to friends
Print
Newsletter
Share this news