CMA CGM Fidelio: Fire on Board 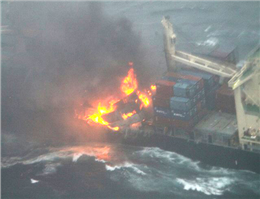 The vessel was en route from Valencia to Malta, when flames erupted in the superstructure, MANA correspondent reported.
The Spanish Navy and Maritime Rescue attended the container ship after declaring a fire in the crew cabins on March 24.
Maritime Rescue spokesman Miguel Chicón said that after receiving the alert, Salvamento Marítimo moved the ship 'Marta Mata' to the scene and required the presence of the ship 'Martín Posadillo' of the Navy, and the 'Sicilia' of Baleària, which were close to the place.
The salvage vessel Marta Mata BS-33 sailed from the port of Ibiza and headed to the position of the container ship.
The fire was limited in the area of ​​accommodation of the ship. No casualities reported. The extends of the damages caused by the fire and the root cause are unknown.
The container ship CMA CGM Fidelio has overall length of 348.00 m, moulded beam of 43.00 m and maximum draft of 10.30 m.
0
Tags: CMA CGM france spain container ship fire
Visit Home
Send to friends
Print
Newsletter
Share this news