Pirates have hijacked an oil tanker with eight Sri Lankan crew on board, Somali authorities said on Tuesday, the first time a commercial ship has been seized in the region since 2012. 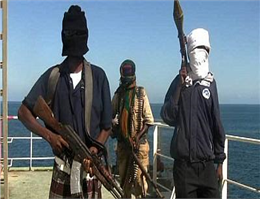 According to MANA, we are determined to rescue the ship and its crew. Our forces have set off to Alula. It is our duty to rescue ships hijacked by pirates and we shall rescue it," Abdirahman Mohamud Hassan, director general of Puntland’s marine police forces, told Reuters by phone.
The 1,800 deadweight ton Aris 13 is owned by Panama company Armi Shipping.
Now that the ship was captured, Somali authorities must ensure it was contained and not used as a mothership, he said, referring to a hijacked vessel used to launch attacks.
0
Tags: Oil Tanker Pirates Hijack
Visit Home
Send to friends
Print
Newsletter
Share this news