Twenty seven crew members were rescued from a North Korean general cargo ship identified as Kum San that sank on March 9, having collided with a Chinese fuel tanker off the east coast of China, Reuters reported citing the country’s Transport Ministry. 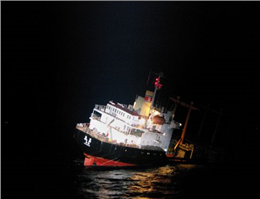 As informed, the Chinese vessel did not sustain major damage in the incident that occurred in the vicinity of the port of Lianyuanhang in Jiangsu province, MANA correspondent reported.
There were no reports of environmental pollution.
The 8,600-dwt Kum San was reportedly anchored when it was hit by the bunkering tanker, causing major breach in the ship’s hull and subsequent water ingress. As the crew was unable to stabilize the vessel, they abandoned ship.
Investigation into the incident is underway.
The ship was not recorded on United Nations list of sanctioned North Korean vessels, Reuters reported.
0
Tags: North Korea sink general cargo china
Visit Home
Send to friends
Print
Newsletter
Share this news