Finland to Invest in Amirabad Port

Finnish Ambassador to Tehran announced that his country is fully ready to invest in Amirabad Port. 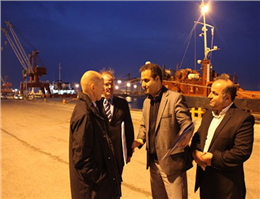 Finnish Ambassador to Tehran , Harri Kämäräinen, paid a visit to Amirabad Port and was briefed on the capabilities, potential and operational areas of this port, MANA correspondent reported.
With Expressing his wonder of Amirabad port’s capabilities and facilities, Kämäräinen remarked: this port could be considered as a key gateway for Commonwealth of Independent States (CIS).
He also stressed that his country is willingness to investment in Amirabad port.
counting Amirabad port as the largest port of Caspian Sea, one official in Amirabad Port announced that we are also keen to cooperate in different maritime, port and investment fields with Finland.
0
Tags: Amirabad Port investment Finland
Visit Home
Send to friends
Print
Newsletter
Share this news