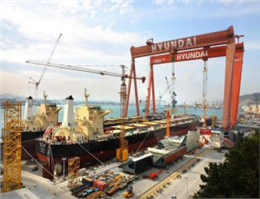 According to MANA, namely, the company is reportedly negotiating the orders with two undisclosed shipping firms based in Hong Kong and Singapore, respectively.
If the parties agree on the shipbuilding deals, the order would count up to 12 VLCCs, including options.
So far this year, the shipuilder secured contracts for four VLCCs.
Two of these were ordered by crude oil tanker company DHT Holdings in January. Featuring 319,000 dwt, the new VLCCs are expected to join the company’s fleet in July and September 2018.
The other two 300,000-ton VLCCs were ordered en bloc by Greek shipowner Enesel in early February. Scheduled for delivery in the second half of 2018, the vessels were ordered at a price of USD 83 million a piece, according to VesselsValue data.
0
Tags: HHI VLCC built
Visit Home
Send to friends
Print
Newsletter
Share this news