The Panama Canal set a new daily tonnage record in February 2017 of 1.18m Panama Canal tonnes (PC/UMS) with a total of 1,180 vessels through both the expanded and original locks. 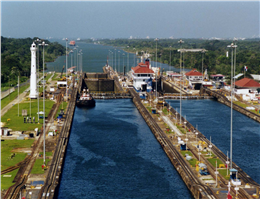 According to MANA, the previous record was established in January 2017 when the canal recorded a daily tonnage average of 1.16 PC/UMS.
February is the third-consecutive record-breaking month for the Panama Canal. In December 2016 and January 2017, the waterway set monthly tonnage records after transiting 35.4m PC/UMS and 36.1m PC/UMS, respectfully.
Eight months since the inauguration [of the new locks], approximately 850 neo-panamax vessels have transited the new locks, and 53% of containerised cargo transiting the waterway is using the expanded canal.
And in April 2017, the first neo-panamax cruise ship, capable of carrying up to 4,000 passengers, will transit the new locks.
0
Tags: panama canal Daily Tonnage Sets Record
Visit Home
Send to friends
Print
Newsletter
Share this news