CMA CGM posted a consolidated net loss of $325m in 2016, but was in the black by the fourth quarter as the container trades started to pick up. 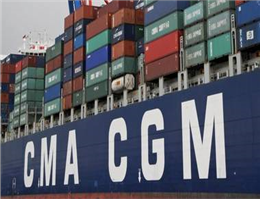 According to MANA, however, the French line is forecasting further recovery in 2017 after conditions started to improve late last year.
In the fourth quarter, the line posted a profit of $45m against a $46m loss a year earlier. Revenue jumped 28% and freight rates also moved higher.
Last year had been a landmark one in the history of the group's development, "with the strategic acquisition of NOL and the creation of Ocean Alliance, which will fully contribute to the group’s performance in 2017,” said Mr Saadé. “In 2016, we succeeded in maintaining a slightly positive core earnings before interest and tax margin, despite historically low freight rates, focusing on the volumes generating the highest contributions.”
He added that with the increase in freight rates observed in recent months, the carrier recorded a positive result in the fourth quarter and delivered one of the best performances in the industry.
“In 2017, the market is expected to continue its recovery,” he said. “CMA CGM will pursue its strategy of development and innovation, in order to consistently offer its customers more high value-added services and thereby differentiating ourselves from the competition.
The French line, which is now firmly established as the world’s third largest container line and could even move further up the league table, has had a hectic year but appears to have no plans to ease up.
It confirmed the start of operations on April 1 of the Ocean Alliance, the new grouping it has formed with Cosco Container Lines, Evergeen Lines and Orient Overseas Lines with the aim of increasing its competitiveness on the global market.
0
Tags: CMA CGM loss
Visit Home
Send to friends
Print
Newsletter
Share this news