Multiple fast-attack vessels from Iran's Islamic Revolutionary Guard Corps came close to a U.S. Navy ship in the Strait of Hormuz on Saturday, forcing it to change direction, a U.S. official Claimed . 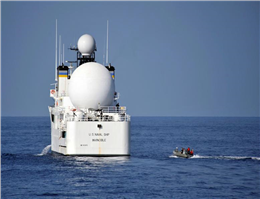 According to MANA, the official, said the boats came within 600 yards (meters) of the USNS Invincible, a tracking ship, and stopped. The Invincible and three ships from the British Royal Navy accompanying it had to change course.
The official also claimed: attempts were made to communicate over radio, but there was no response and
0
Visit Home
Send to friends
Print
Newsletter
Share this news