No one can look back on their schooldays and say with truth that they were altogether unhappy, and the freight market might have reminded us of this bittersweet memory during the week. 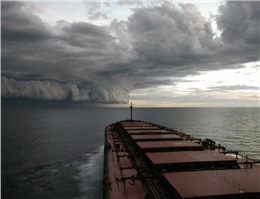 The Baltic Dry Index, (BDI) started the week strong, having rolled through eight consecutive days of winning streaks to 878 points on Monday, MANA correspondent reported.
Then, the index scaled down, dropping 19 points on Tuesday before bouncing back to 871 points on Wednesday.
To be the fair, BDI has been on the ascendancy since Valentine’s Day with baseline at 685 points before being pushed by the “power of love” towards its current 870 points level. However, this love affair might be losing steam as more market uncertainty lies ahead in March 2017.
The lack of market direction may partly attributed to China’s National People Congress meeting during the first week of the March, where the Politburo members will chart the country’s economic outlook with more than a tinge of environment protectionism.
Ahead of the meeting, the Chinese authority has imposed industrial output cut near Beijing, where the congress will be held, to improve air quality. In particular, the authority has implemented a 50% cut in sintering production in Tangshan from 1 March ‘till 15 March 2017, affecting the demand of seaborne steel-making commodities like iron ore and coking coal.
Capesizes came under came under pressure on Monday after another quiet day on physicals and holidays in Brazil, Greece and Taiwan.
Thus, he felt the softer rates reflected the loss of confidence by some traders while the market fundamentals remained largely intact.
Since then, capesizes had slipped from $9,133 on Monday to $7,893 on Wednesday after a loss over of $1,240.
In contrast, other freight rates thrived as capes fell, with panamax continuing its bullish charge since Monday where holidays in shipping countries hampered futures trading. Panamax continued its bullish tone on 1 Mar 2017 as prompt periods saw further gains in a busy morning session with March pushing up to $10,000.
By Wednesday, the panamax time charter average rates were recorded at $8,366, up $606 from $7,760 posted on Monday.
Similar bullish trends were seen in supramax rates as well, which had a softer start at $8,547 on Monday before ended at $8,707 on Wednesday, booking a gain of $160. Handysize rates also matched the uptrend, and posted $6,609 on Wednesday, up $210 since Monday.
0
Tags: Baltic Exchange dry bulk china
Visit Home
Send to friends
Print
Newsletter
Share this news