The managing director of Chabahar Free Trade–Industrial Zone (CFZ) stated that in the course of one past year, export growth and the remarkable participation of foreign companies could be regarded as the most important achievements in this region. 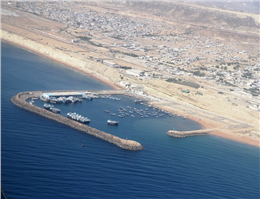 Pointing out to the remarkable performance of Chabahar Free Trade-Industrial Zone, Abdel-Rahim Kordi also remarked: goods export from this region experienced a 30-percent rise, MANA correspondent reported.
He referred to a 25-percent increase in registering of foreign companies in CFZ and added: in the post-JCPOA era, 63 foreign corporations have been registered in this region, a figure which highlights an outstanding growth in this regard.
This official also stated: due to the international sanctions, in the past years, there was no continuous and regular shipping line on the route of Chabahar port.
but in the light of constructive measures and continuous pursing, Islamic Republic of Iran Shipping Lines (IRISL) will launch a regular shipping line on the route of Chabahar port in the near future, he added.
Referring to signing 15 memorandum of understanding for joint ventures with foreign corporations, he proposed: all this MOUs have been signed in the post-JCPOA era.
With regards to holding international conference on investment opportunities and sustainable development in Makran Coasts in February 2017, Kordi clarified: in this conference, five MOUs with foreign investors have been signed.
Another MOU with world's fourth biggest producer of crude steel (POSCO, in Pohang, South Korea) was also inked with Makran Steel (chabahar free zone) Company in the fields of investment and joint venture, according to Kordi.
0
Tags: Chabahar Free Zone High Performance In the post-JCPOA Era
Visit Home
Send to friends
Print
Newsletter
Share this news