A general cargoship has run aground and capsized en route to the Galapagos Islands. 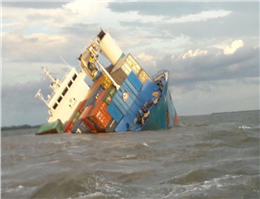 According to MANA, A general cargoship has run aground and capsized en route to the Galapagos Islands.
Ecuadorian media said the 3,800-dwt Isla Bartolome (built 2013) hit a sandbar on the afternoon of 23 February after it left Guayaquil.
It developed a list to starboard and capsized.
The ship has 160 containers carrying food and supplies on board.
Fishermen rescued the crew and helicopters were sent to the scene to track drifting containers from the partially submerged cargoship.
Planes and smaller supply ships were pressed into service to avoid shortages on the islands.
The vessel is operated by Transnave of Ecuador and works under a navy contract.
0
Tags: capesize Bulker
Visit Home
Send to friends
Print
Newsletter
Share this news