Safety at sea has improved significantly in the past twenty years, with losses of large merchant vessels becoming a relatively rare event, says a report from Clarksons Research. 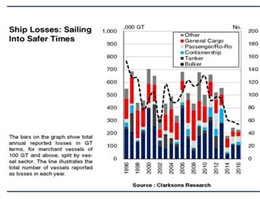 Whilst casualties appear to be more common among older and smaller vessels, total losses seem to be on a downward trajectory, MANA correspondent reported.
Even as the world fleet reached its greatest ever size, last year marked the fewest number of vessel losses on record.
Total ‘losses’, when vessels are permanently lost from the fleet due to sinkings, groundings or other incidents, have been on a downward trend over the long-term despite the growing fleet.
This has been supported by improvements in ship design, an increasing number of port state control inspections and a decline in the proportion of vessels above 25 years old. In 2016, reported losses reached a historically low level of 54 vessels and 0.2m GT.
From 1996 to 2016 a total of 160 bulkers of 3.7m GT were reported as casualties, accounting for 36% of the total in tonnage terms.
In comparison, the total volume of tanker and containership tonnage reported as losses in the same period represented 9% and 5% respectively of total losses (totalling 143 tankers and 49 boxships).
In the bulkcarrier sector, losses of larger ships have been more common, with an average vessel size of 23,247 GT, against 6,181 GT for tankers.
Sectors with a large number of smaller units represent the majority of losses in numerical terms. In general, smaller ships account for a larger proportion of casualties, with the average size of losses peaking at around 7,600 GT in 2000. 1,033 general cargo ships were reported as losses from 1996 to 2016, making up 50% of the total in numerical terms.
Meanwhile, 184 vessels were recorded as losses in the same period in the passenger and ro-ro sectors.
0
Tags: 2016 Bulker sink
Visit Home
Send to friends
Print
Newsletter
Share this news