APM Terminals to Boost its Investment in American Port

APM Terminals has decided to increase investment at its Port Elizabeth terminal in New Jersey, USA to $200m from $70m initially. 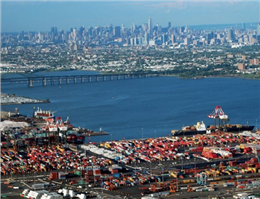 According to MANA, As part of the boosted investment figure, APMT will order a quartet of ship-to-shore cranes that are able to serve ultra large containerships at the terminal.
These ULCs are scheduled to call at the terminal after the Bayonne Bridge heightening project is completed later in 2017.
"The heightening of the Bayonne Bridge, combined with the widened Panama Canal allows these ULC liner services to call and be operated efficiently at the advanced APM Terminals facility," said the terminal operator.
The Bayonne Bridge, which connects New Jersey to Staten Island, is in the process of being raised to a height of 65.5 metres from its current height of 46 metres to allow ULCs to sail into Newark Bay.
Other investments comprise an expanded gate facility to optimise truck transportation of cargoes, container handling equipment upgrades to improve fuel efficiency and environmental sustainability, as well as other operational enhancements in light of the upcoming ULC calls.
APMT expects to increase the Port Elizabeth facility's handling capacity to 2.3m teu from 1.5tm teu at present, after berth expansions to accommodate three simultaneous ULC vessel calls are completed.
0
Tags: APM Terminals American Port investment
Visit Home
Send to friends
Print
Newsletter
Share this news