The bodies of at least 74 migrants have been found washed up on the shore in western Libya after the engine of their inflatable boat was stolen, coastguard and aid officials said on Tuesday. 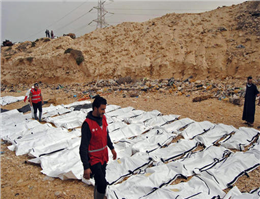 According to MANA, Joel Millman, a spokesman for the International Organization for Migration (IOM), said a local staff member had reported that "traffickers came and removed the engine from the boat and left the craft adrift".
"This is not a only horrible number of deaths in one incident but it strikes us as something that we haven't really seen much of, which is either deliberate punishment or murder of migrants," Millman said.
Libya is the main departure point for migrants hoping to reach Europe by sea. They generally attempt the crossing in flimsy inflatable craft loaded with small amounts of fuel which are intended to get them only as far as European rescue vessels stationed in international waters.
The Red Crescent published pictures of the bodies laid out in white and black body bags along the beach. Some of the images showed a semi-deflated grey rubber boat of the kind typically provided by migrant smugglers, with wooden boards inserted to reinforce the floor, pulled up half-way onto the beach close by.
Some bodies were still inside the boat. A local volunteer said the toll could rise, as some bodies had been spotted in the sea but aid workers had not yet been able to recover them.
Last year a record 181,000 migrants crossed between Libya and Italy. More than 4,500 are known to have died. The IOM said the latest incident raised the total number of deaths this year to more than 365.
Having largely closed off sea crossings between Turkey and Greece last year, the European Union is searching for ways to stem the flow of migrants from Libya.
0
Tags: Dead migrants Libya beach
Visit Home
Send to friends
Print
Newsletter
Share this news