2016 was a busy year for global ship recycling, especially when it comes to boxships and bulkers. What is more, shipbreaking is expected to remain at elevated levels this year as well, bringing some ease to the shipping industry plagued by oversupply, according to Clarksons Research. 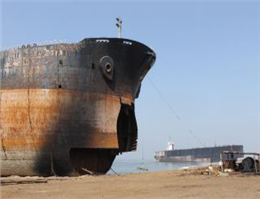 According to MANA, bulker and containership recycling activity was very strong in 2016 and accounted for 65% and 18% of total demolition respectively in terms of dwt. The 0.7 million TEU of boxships scrapped was 48% higher than the previous peak in 2013, while the 28.9 million dwt of bulkers scrapped in 2016 was the second highest yearly total on record.
Recycling volumes at Pakistani breaking yards were steady year-on-year in 2016, with 117 vessels of a combined 8.9 million dwt recycled. However, a number of fatalincidents at yards towards the end of the year caused temporaryclosures.
On the other hand, Bangladeshi breakers saw their share of world demolition decrease from 35% to 31% over the same period. However, taking into account dwt tonnage, they still represented the largest share of demolition activity, scrapping 199 vessels of a combined 13.6 million dwt in 2016.
Additionally, Chinese breakers recycled 111 ships of a combined 4.9 million dwt in 2016, 11% of the world total and a year-on-year decrease of 25% in dwt terms. Green recycling facilities in China have benefited from the domestic scrap subsidy introduced in 2013, with domestic owners accounting for 87% of tonnage recycled at Chinese yards. However, domestic scrapping fell 31% year-on-year in 2016 to 4 million dwt.
Turkey scrapped the most vessels of any other nation in 2016. A total of 84 ships totaling 0.9 million dwt were recycled at Turkish yards, representing 2% of global demolition.
Looking ahead, increased pressure to ensure safer and greener ship recycling may have a future impact on the breaker landscape, Clarkson predicts. However, with around 40 million dwt currently projected for demolition in 2017, scrapping activity is likely to remain high.
0
Tags: scrapping busy year clarksons
Visit Home
Send to friends
Print
Newsletter
Share this news