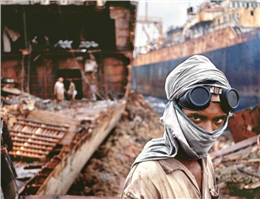 Acording to MANA, The Indian subcontinent’s (ISC) share of scrapping reached a decade high in 2016, despite increased calls for greener recycling.
The proportion of tonnage sold for scrap to ISC breakers rose to 79% last year, according to Clarksons.
ISC breaking yards recycled 656 vessels of a combined 40mdwt in 2016.
“Indian breakers experienced a resurgence after a comparatively slow 2015, with 340 ships of a combined 12.5mdwt recycled in 2016,” the shipbroker said.
“This led their share of total demolition to rise from 20% in 2015 to 28% in 2016 in dwt terms.”
India’s resurgence comes as the global scrapping industry experienced the third highest year on record in terms of tonnage demolished, with a reported 933 ships of a combined 44.4mdwt scrapped. This was a year-on-year increase of 14%.
Bangladeshi breakers saw their share of world demolition decrease from 35% to 31% over the same period.
However in deadweight terms they still represented the largest share of demolition activity, scrapping 199 vessels of a combined 13.6mdwt in 2016.
Clarksons said recycling volumes at Pakistani breaking yards were steady year-on-year in 2016, with 117 vessels of a combined 8.9m dwt recycled despite a series of fatal accidents.
China appears to have been one of the losers with 111 ships of a combined 4.9mdwt recycled in 2016, 11% of the world total, but a year-on-year decrease of 25% in dwt terms.
0
Tags: Demolition INDIAN SUBCONTINENT
Visit Home
Send to friends
Print
Newsletter
Share this news