A continent two-thirds the size of Australia has been found beneath the south-west Pacific Ocean, scientists reported in the journal of the Geological Society of America. 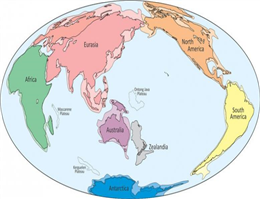 According to MANA, the land mass of 4.5 million square kilometers (1.74 million square miles) is 94 percent underwater and only its highest points - New Zealand and New Caldeonia - poke above the surface.
"It's rather frustrating for us geologists with the oceans being there," said Nick Mortimer, a geologist at GNS Science in Dunedin, New Zealand.
"If we could pull the plug on the oceans it would be clear to everyone we have mountain chains and a big high-standing continent above the ocean crust."
"Since about the 1920s, from time to time in geology papers people used the word 'continental' to describe various parts of New Zealand and the Catham Islands and New Caledionia," Mortimer said.
0
Tags: New Zealand pacific ocean
Visit Home
Send to friends
Print
Newsletter
Share this news