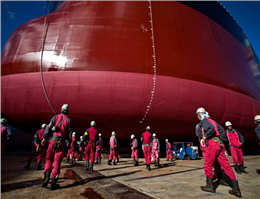 According to MANA, orders last month include one handy size bulk carrier and four handymax bulk carriers, according to data from the Japan Ship Exporters' Association.
All payment would be made in cash and in foreign currencies.
In the same month, Japanese builders delivered 45 vessels—two general cargo carriers and 37 dry bulkers, totalling 1.7m gt or 869,015 compensated gross tonnes.
As of end-January, yards in Japan had a combined orderbook backlog of 551 vessels, with a total tonnage standing at 28.9m gt or 13.9m cgt.
Of those, 52 vessels are scheduled for delivery within the 2016 fiscal year ending on March 31, 2017, 226 ships in the 2017 fiscal year, 176 in fiscal year 2018, 85 in the 2019 fiscal year and 12 in the 2020 fiscal year.
Analysts and brokers are expecting orders for new dry bulk tonnage to pick up this year amid as freight rates have been generally strengthening over the past one year, although any improvements would be made against a low base in 2016.
Last year, Japanese shipbuilders won 75 newbuilding orders for export totalling about 3.7m gt, the lowest level since 1992 as shipbuilders were experiencing one of the industry’s worst downturns.
0
Tags: japan rise Newbuilding Orders
Visit Home
Send to friends
Print
Newsletter
Share this news