Cargo Volumes Down at Port of Rotterdam

Freight volumes slipped in 2016, in a challenging year for the shipping sector. 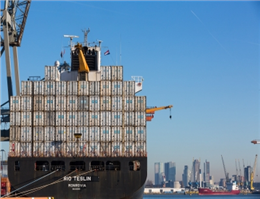 According to MANA, the Port of Rotterdam has announced it saw freight volumes fall by 1.1% to 461.2mn tonnes in 2016, with much of the fall largely attributed to dry bulk such as ores and coal.
Over the year, liquid bulk managed to maintain to the high level reached in 2015. Following 10% growth in 2015, 1.2% more containers were handled in 2016.
Allard Castelein, ceo Port of Rotterdam Authority, said that while levels have fallen overall, growth in 2015 was “exceptional” at 4.9%.
“The Rotterdam port and industrial complex is facing huge challenges, in particular digitisation and energy transition as well as stiff competition from surrounding ports,” he said.
Despite the fall in volumes, profits were slightly up during the year.
Turnover remained stable at EUR675.4mn as a result of costs being under control, as profits increased by 5.0% to EUR222.2m.
Paul Smits, cfo, commented: “Investments rose by 16% and they are at least expected to be comparable to 2016 levels over the next few years.
Throughput of ores and scrap dropped by 7.8% to 31.2m tonnes. The main reason for this was the dumping of Chinese steel, although there was an increase in the export of scrap to Turkey, which has announced anti-dumping measures.
The amount of coal handled dropped by 7.3% to 28.4m tonnes.
Container volumes rose by 1.2% to 12.4m teu and a 0.6% increase in weight to 127.1m tonnes. In the second half of the year, 4.9% more was throughput than in the same period of the previous year.
0
Tags: Port of Rotterdam down cargo volume
Visit Home
Send to friends
Print
Newsletter
Share this news