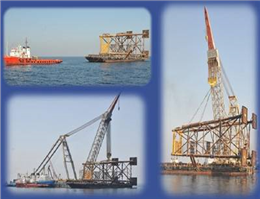 According to MANA News Agency, the official said the vessel was en route to its operational location in South Pars oil layer and would will be deployed to the region’s waters in case of favorable weather conditions.
"The $300-million FPSO unit was built in Singapore and will be deployed above the South Pars' oil layer in the near future," Roham said.
FPSO is a floating vessel used by the offshore oil and gas industry for the production, processing and storage of hydrocarbons. It is designed to draw hydrocarbons or receive crude oil from nearby platforms and process and store it.
Several wells have been drilled in the oil layer of South Pars and the ground is prepared to extract crude oil from the shared field, said Qasemi.
0
Tags: FPSO Persian Gulf NIOC
Visit Home
Send to friends
Print
Newsletter
Share this news