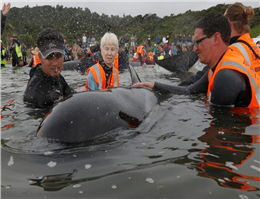 According to MANA, there were 240 whales strand yesterday in the afternoon and authorities were fearful they were going to end up with 240 dead whales this morning.
However, they self-rescued, in other words the tide came in and they were able to float off and swim out to sea."
The pod was the second large group to strand itself in recent days at Golden Bay, at the northwest tip of the South Island, in one of the worst mass strandings in New Zealand.
On Thursday evening, a conservation worker spotted that about 400 whales had washed ashore. Hundreds of volunteers spent days pouring water over the beached whales to try and keep them cool, while waiting to catch high tides to carry them out to sea again.
0
Tags: whale New Zealand
Visit Home
Send to friends
Print
Newsletter
Share this news