A 6.3 magnitude earthquake struck off the Arabian Sea coast of Pakistan in the early hours of Wednesday, the U.S. Geological Survey said, but there were no early signs of casualties or damage. 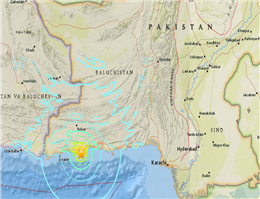 According to MANA, The epicenter of the tremor was around 90 km (55 miles) south of the town of Turbat, just off the coast at a depth of 10 km (6 miles) below the seabed, said the USGS, which initially estimated the magnitude at 6.6.
There were no immediate reports of damage or fatalities from the quake, which was centered between the Chinese-operated port of Gwadar and the city of Pasni, in Baluchistan province.
Pasni has a population of around 400,000 people.
0
Tags: EARTHQUAKE Pakistan
Visit Home
Send to friends
Print
Newsletter
Share this news