Libyans Intercept Migrants off Western Coast in a Week

Libya's coast guard intercepted at least 1,131 migrants near the western city of Sabratha over the course of a week. 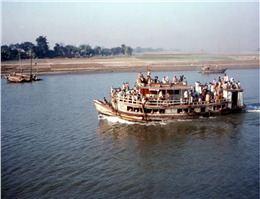 According to MANA, 431 migrants had been intercepted on four inflatable boats off Sabratha's coast on Thursday and some 700 had been picked up on Jan. 27 from three wooden vessels in the same area.
"The illegal migrants are from various sub-Saharan countries and include a big number of women and children," Qassem said of those intercepted on Thursday.
Those intercepted on Jan. 27 also included migrants from Syria, Tunisia, Libya and the Palestinian territories, he said, and smugglers had attempted to block the coast guards from taking those migrants from their boats.
"Smugglers had tried to foil the process of arrest by opening fire on our coast guards but the coast guards fired back and that forced the smugglers to withdraw."
0
Tags: Migrants
Visit Home
Send to friends
Print
Newsletter
Share this news