Orient Overseas Container Line (OOCL) was benefitted substantially from the collapse of Hanjin Shipping according to SeaIntelligence ceo Lar Jensen. 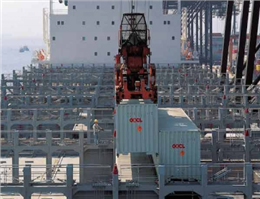 Jensen noted in a Linkedin post that in the fourth quarter of 2016 OOCL had seen a 30% growth on the transpacific trade and 28% on the Asia – Europe trade, MANA correspondent reported.
“Clearly this far exceeds underlying market growth, and shows that OOCL has benefitted greatly from Hanjin's collapse,” he stated.
With scale having gained critical importance this year sees OOCL taking delivery of 20,000 teu vessels.
“We still need to await operational results from the other global carriers to get the full picture of how the spoils from Hanjin has been divided, but it certainly appears that the "flight to safety" for Hanjin volume, which market has been talking about for months, has indeed been good for OOCL who is seen as one of the more financially stable carriers,” Jensen said.
The 2M alliance of Maersk Line and MSC has been one of the most obvious movers to capture volumes handled by Hanjin Shipping before it filed for bankruptcy on 31 August 2016. Maersk now operates 11 containerships that used to be part of Hanjin’s fleet.
0
Tags: oocl Hong Kong container line Hanjin Shipping
Visit Home
Send to friends
Print
Newsletter
Share this news