Greece has given investors until March 24 to submit binding bids for a majority stake in its second biggest port, Thessaloniki Port (OLTr.AT) 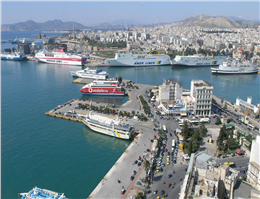 Accoridng to MANA, The sale of the 67 percent stake in the port and other privatisations are a key part of the country's current EU/IMF international bailout deal, the third since 2010.Potential investors include shortlisted Danish container terminal operator APM Terminals [APMOLM.UL], Phillipines-based International Container Terminal Services ICTS (ICT.PS), Dubai-based P&O Steam Navigation Company (DP World) DPW.DI and Japan's Mitsui & Co (8031.T).
Past deadlines for the submission of binding bids have been pushed back several times due to differences over the amount of mandatory investment and other issues.
Athens has said the buyer will have to invest 180 million euros by 2021 to develop the port.
Port workers oppose the sale, saying the size of mandatory investment is low and reducing the value of the port, said Lazaros Tantalidis, their representative on the port's board.
Thessaloniki Port, which currently has a market value of $200.5 million (186 million euros), had a throughput of 344,277 TEUs (twenty-foot equivalent units) last year.
0
Tags: greece port
Visit Home
Send to friends
Print
Newsletter
Share this news