The Libyan Coast Guard says that human smugglers opened fire on one of its vessels during a mission to intercept 700 migrants off the coast of western Libya. 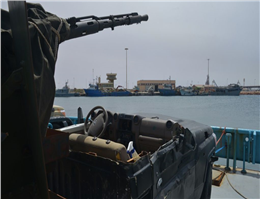 According to MANA, he assailants reportedly shot at the coast guard vessel from shore, and Libyan servicemembers returned fire, forcing the smugglers to retreat. The coast guard crew proceeded to intercept two wooden boats loaded with hundreds of migrants. No casualties were reported in the incident.
It is not the first report of gunfire in a confrontation between security forces and human smugglers off Libya. In 2015, the EU Frontex patrol vessel Tyr reported that human traffickers had fired shots during an attempt to recover a smuggling boat. approached with smugglers aboard.
Libyan maritime security forces have also been accused of violence in interactions with maritime migrants.
“The violent behaviour of the assumed Libyan coast guard caused a mass panic; all of the 150 passengers fell into the water and a two-digit number drowned.”
0
Tags: Human Smugglers Libyan Coast Guard open fire
Visit Home
Send to friends
Print
Newsletter
Share this news