THE cascade of ships from Asia-Europe is passing overcapacity on to smaller trades that often do not have the demand growth to absorb them easily, according to new research by Drewry. 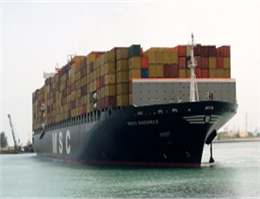 According to MANA, while conditions in the container sector are thought likely to improve this year as rates begin to rise and consolidation takes effect, Drewry points out an overhang of deliveries of large vessels threatens to destabilise the market again.
“This year the industry will have to make room for as much as 1.7m teu of newbuildings, assuming none slip into next year, with more than half being 14,000 teu or above,” Drewry said.
Because most of the big ships will go straight into the Asia-Europe market, they will push out smaller units into secondary routes such as Asia-Mediterranean, transpacific and the Asia to Mid-East routes.
Average ship sizes have increased on most of the major trades, with the exception of the westbound transatlantic.
“A 22% jump in the size of vessels serving Asia to east coast North America is entirely linked with the widening of the Panama Canal last summer but the disparity with demand growth does mean that carriers have had to make a trade-off by reducing the number of services,” Drewry said.
Moreover, demand growth in the north-south trades meant those trades were not in a position to accommodate much additional capacity.
“The appearance of 13,000 teu ships on the Asia to West Africa trade helped boost the average deployed tonnage by 16% in 2016, yet shipments in the southbound leg were down by 11% as of end-November 2016,” Drewry said.
“On the Asia-east coast South America trade, ship sizes are up by 7% — a legacy of orders placed when Brazil was a fast-growth market — but demand has fallen by close to 20%.”
“However, the pain has merely been passed along to the north-south trades, where utilisation is in decline,” Drewry said.
“These trades are the victims of the fact there is simply nowhere else to put the cascaded east-west ships and, until they recover the demand strength, carriers will either have to accept poor returns on freight rates or park more ships.”
0
Tags: container outlook Asia-Europe bankruptcy
Visit Home
Send to friends
Print
Newsletter
Share this news