The Managing Director of Iran’s Ports and Maritime Organization stated: at the present time, there is no restrictions in the field of maritime transportation and ports. 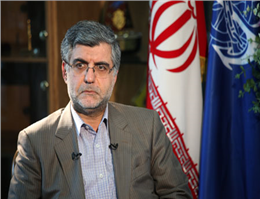 Referring to the main achievements of Joint Comprehensive Plan Of Action (JCPOA) execution, Mohammad Saeednejad remarked: to cripple Iranian economy, maritime transportation was the first target of sanction imposers, MANA correspondent reported.
Stating that heaviest sanctions imposed on Iranian shipping lines, he continued: thanks to the negotiation team's smartness and accurate expert studies, immediately after the execution of JCPOA, all related sanctions had removed.
17 Major World Shipping Lines Call at Iranian Port:
Emphasizing that Iranian maritime transportation faces no sanctions, Saeednejad further added: after the lifting of the sanctions and the execution of JCPOA, seventeen major world shipping lines have called at Iranian Port as well as access to world’s ports have been facilitated for Iranian ships.
Iranian ships could easily sail to each and every corner of the world and call at major world ports weekly or monthly, he continued.
Deeming the insurance issues as one of the major problems in the field of maritime transportation, the managing director of Iran’s ports and maritime organization proposed: global Classification Societies have commenced their cooperation with Iranian corporations and all insurance issues have been resolved completely.
Purchasing Ports Equipment
Counting access to the competitive market in the field of purchasing ports equipment as a main achievements of JCPOA execution, Mohammad Saeednejad stated: one important shipment of required industrial equipment for ports has been purchased and will import to Chabahar port in the upcoming days.
Absorbing Foreign Investment:
This official further added: the way has been paved for absorbing of foreign investment and the foreign investors have also shown keen interest in investment in Iranian port.
Nine major European corporations have so far announced their readiness for developing third phase of Shahid Rajeei port, he continued.
Given that all obstacles have been eliminated, very positive outlook and new horizons are ahead of Iran 's transportation and shipping industry, according to Mohammad Saeednejad.
0
Tags: sanction maritime transportation remove
Visit Home
Send to friends
Print
Newsletter
Share this news