A South Korean naval plane has accidentally dropped anti-ship missiles into the Sea of Japan after a member of the crew pushed a wrong button on New Year’s Day. 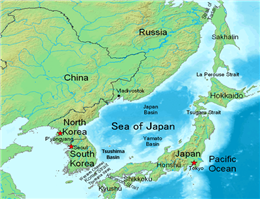 The weapons were not armed. The weapons fell into the water about 50 kilometers (31 miles) to the east of Yangyang and are now being retrieved.

A fishing boat was reportedly in the area but was unaffected.