Five people were killed and around 100 people rescued on Sunday after a fire ripped through a boat carrying tourists to islands north of the Indonesian capital Jakarta, authorities said. 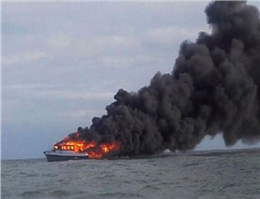 According to MANA, Along with five fatalities, 17 people were also injured, said Ferry Budiharso, a spokesman for the Thousand Island police, the area where the boat was heading.
The head of Jakarta's search and rescue agency, Hendra Sudirman, said that 98 people had been rescued.
The boat, Zahro Express, caught fire shortly after leaving Muara Angke port in North Jakarta early on Sunday due to a short circuit on a power generator on the boat, Budiharso said.
0
Tags: Indonesia Tourist fire
Visit Home
Send to friends
Print
Newsletter
Share this news