Pakistan released 220 Indian fishermen on Sunday as a goodwill gesture aimed at easing tensions with its neighbour, officials said. 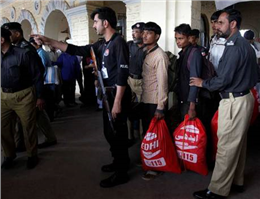 The men were arrested more than a year ago, accused of entering Pakistani waters in an area of the Arabian Sea where the border is unclear.
India is also holding Pakistani fishermen for the same reason, and Pakistan hopes its gesture — on the birthday of the nation’s father, Mohammad Ali Jinnah, which coincides with Christmas Day — will be reciprocated.
“We have total of 518 Indian fishermen, out of which 220 are being released today as a goodwill gesture of the Pakistan government. In the next phase, 219 fishermen will be released on January 5,” Shunail Husain Shah, a police assistant superintendent, said.
Relations between the nuclear-armed neighbours have been more fraught than usual since
“We appreciate Pakistan’s goodwill gesture of releasing Indian fishermen, but we expect a similar reciprocal move by India, 156 Pakistani fishermen including 13 children are languishing in Indian jails,” Mohammad Ali Shah, president of Pakistan Fisher Folk, a fishermen’s rights body, said.
The UN Convention on the Law of the Sea states that fishermen who cross territorial waters can be warned and fined but not arrested, and Shah called on both countries to respect that.
0
Tags: india Pakistan
Visit Home
Send to friends
Print
Newsletter
Share this news