Indian Ports on the Move 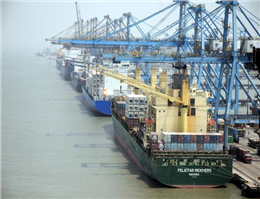 Total throughput at major Indian state-owned ports increased 6.8% in the eight months from April, which is the start of the country’s fiscal year, as gains in the handling of containers, crude oil and miscellaneous cargo offset lower coal and fertiliser volumes.

These ports handled 424.1m tonnes of cargo between April and November 2016, compared to 397.2m tonnes in the year-ago period as volumes picked up after the monsoon season, recent data from the Indian Ports Association shows.

Activity tends to slow during the monsoon, from June to September, affecting mostly the west coast. Construction activity is affected by rains and rough seas restrict shipping movements.