President Rouhani made the remarks in an interview with reporters as five documents for cooperation were signed by senior Iranian and Kazakh officials on Thursday. 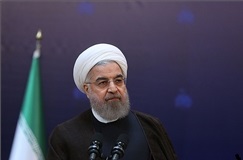 President Rouhani said following visit of Kazakh President Nursultan Nazarbayev to Tehran last April and inking of many cooperation documents, Iran and Kazakhstan have been witnessing ever-growing economic, cultural and scientific relations, According to MANA.
He said today, conditions are ripe more than ever for expansion of relations. "The first top issue in this concern is transit advantages of the two countries. Promotion of the rail and road links and direct flight between the two countries falls in the same line."
He added that today, the transportation route between China and Persian Gulf and the Sea of Oman has dramatically become short.
"In oil and gas, Iran and Kazakhstan, both oil and gas producers and exporters, can cooperate with each other. They can have oil swap in the Caspian ports. We can take Kazakh oil and deliver it to Kazakh oil customers in Persian Gulf."
As for petrochemicals, regarding Iran's progress and the plans Kazakhstan has made for the sector, the two sides can have joint activities, he added.