Port of Antwerp to Boost Trade with South Korea 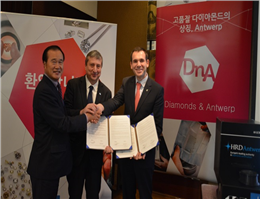 According to MANA, The proposed collaboration between Antwerp Port Authority and KITA represents a significant boost for the port, emphasised Jacques Vandermeiren, CEO-designate of the Port Authority, just before the signing of the MoU.
Antwerp hopes to attract significantly more trade from Korea in future, while KITA for its part sees Antwerp as the gateway to Europe for its exports. "In 2015 we sent 77,000 TEU of container freight to Antwerp. Trade between Korea and Belgium can and must be expanded, and the port of Antwerp has a significant role to play here," declared Mr. Kim Jungsoo, executive managing director of KITA.
0
Tags: Port of Antwerp South Korea
Visit Home
Send to friends
Print
Newsletter
Share this news