Iran to Build nuclear-powered ships after U.S. 'violation' of JCPOA.

Iran's President Hassan Rouhani ordered on Tuesday to start developing systems for nuclear-powered ships , in reaction to the United States' violation of JCPOA. 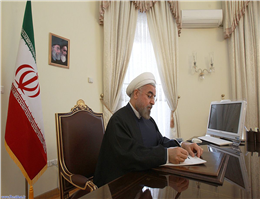 Following U.S government’s delay and negligence in living up to its commitments and violation of the JCPOA, President Rouhani sent a separate letter to the head of Atomic Energy Organization of to implement the required measures in this regard.
In a letter to the head of Atomic Energy Organization, President Hassan Rouhani wrote: Regarding U.S government’s negligence and delay in living up to its commitments made in the Joint Comprehensive Plan of Action, and with regard to the latest extension of Iran Sanctions Act (ISA), which Iran had already declared it was considered violation of JCPOA, and in implementing of the decisions made by the Supreme National Security Council and the Committee of Monitoring JCOPA’s Implementation, the Atomic Energy Organization of Iran is required to further develop Iran’s peaceful nuclear program within the framework of the international commitments of the Islamic Republic of Iran and carry out the following missions:
1. Plan for designing and manufacturing nuclear engine to be used in marine transportation with the help of scientific and research centers.
2. Study and design production of fuel to be used by the nuclear engine with the help of scientific and research centers.
0
Tags: nuclear-powered ships iran JCOPA US
Visit Home
Send to friends
Print
Newsletter
Share this news