October was the busiest month ever at the US Port of Los Angeles, with the port’s containerized cargo eclipsing the previous record of 800,063 TEUs seen in October 2006. 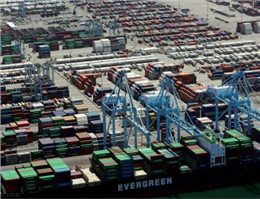 The port recorded a 16 percent increase in its container throughput, which rose to 814,574 TEUs from 704,588 TEUs handled in the same month last year, MANA correspondent reported.
October imports went up by 16.4 percent to 417,311 TEUs from 358,601 TEUs in 2015.
Exports jumped by 23.3 percent to 166,406 TEUs, compared to 134,963 TEUs recorded in the tenth month of 2015.
“It’s encouraging to see that when cargo surges, we have the infrastructure, equipment and human capital to keep the boxes moving,” Gene Seroka, Port of Los Angeles Executive Director, said.
During the first ten months of 2016, the port’s total cargo volumes stood at 7,18 million TEUs, representing an increase of 5.25 percent, compared to the same period in 2015 when the port handled 6,82 million TEUs.
The Port of Los Angeles managed to post the strongest monthly volumes to date despite challenges in the global container shipping industry caused most evidently by the recent bankruptcy of South Korean shipping company, Hanjin Shipping.
On the other hand, California’s second largest sea port, the Port of Long Beach, is still reeling from the effects of Hanjin’s financial troubles and posted a 6.2 percent decline in its container throughput in October.
0
Tags: Los Angeles throughput Container
Visit Home
Send to friends
Print
Newsletter
Share this news